Night of The White Spirit Bear 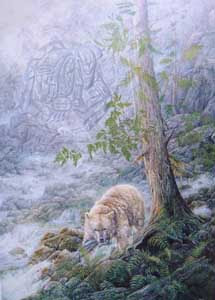 
Night of The White Spirit Bear known as Kermode

It has been said, 5000 years ago,in a small village named Yuquot their lived the first people - the Muchalaht off the coast of British Columbia.
The story of the great white Spirit bear, known today as the Kermode, was handed down to their children.

The Legend of the white spirit bear has been said that mother earth was once covered in a white snow and glacier ice until the creator Raven came and changed the land green of rain forest full of life.

Raven, the great creator, wanted his people to remember that the land was once a great white blanket.

And so, Raven went to the black bear people and told them that from now on they would be blessed with every tenth black bear turning into a White Spirit Bear bringing them special spiritual powers. The Great White Spirit Bear's powers would help the people of the great rain forest find food with magical powers of diving into the deep ocean, bringing the people salmon and magical powers of "Peace" to the People.

Raven gave The White Spirit Bear a home deep in the elusive rain forests where he would be safe from the demons and would live forever in peace and harmony.
But the Legend doesn't end there. The creator Raven had promised its people peace by the magical powers of the Great White Spiritual Bear. It was put to the test one day long ago in year 1790.

The rain forest people were tending to their fishing off the shores of Land of Rainforest's.
Suddenly in the horizon they were met by strange pale white people from a land called Great Britain.
Other people of the rain forest were also greeted by another pale white people from the land called Spain.
They both had funny looking canoes with high walls and blankets made to control the wind. They wore hard shelled clothing that sparkled in the sun; they walked rigid, reminding them of the Grizzly People.

The Spain People fought with the Britain People over a place called Nootka Sound and to these rain forest people it was funny to them.

To the rain forest people the name Nootka in their language meant "Go Around". It has been said that a great Chief of one of the Britain people who was named Captain Cook misunderstood the Muchalaht Rainforest People when they had shouted out the words" Itchme nutka, Itchme nutka!"
The Great Chief of the Britain People,Captain Cook, had thought that this was the Muchalaht peoples name and therefore they became known as the Nootka People.

The Nootka People watched along the shores as the Spain people and the Britain people fought over land that wasn't even theirs.
This is how the Legend of the White Spirit Bear stepped in to bring peace amongst these people.
This great Chief Captain Cook assigned one of his people,named George Vancouver to meet with the Great White Spirit Bear one night in the deep rain forest to discuss peace with the Spain People.

The Great White Spirit Bear had magical powers that made the Britain People and the Spain People feel the spirit come through their bodies.A warm feeling of peace came over them. 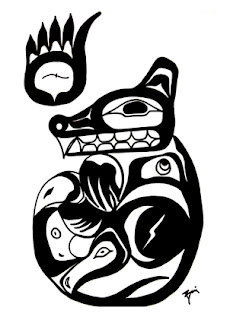 And to this very day, it has been said that a great war had been averted between the two tribal people and it was named the Nootka Conventions of 1790.

In the history books today, it has been said, that a man named George Vancouver and his Spanish counterpart Juan Franciso de la Bodega y Quadra ,were given a special gift of "peace' from the Great White Spirit Bear.
by J. Robb Montana (copyright 2012)
Check out Bloodwolf - enjoy more art pieces by Bari at Fine Art America