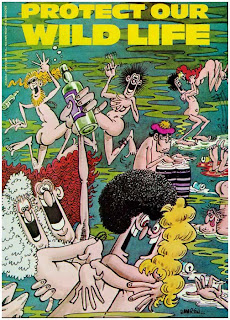 Art Magazines are along with all the popular comics; you might say they are in full "competitive edge" mode. All the artist are pumped with adreline to show-off their skills. Just the slightest mistake or concentration can leave an artist empty-handed.
Gold medal give you world class standing and if it were such a thing as Gold medals when it comes to Artist or Cartoonist, then it would have to be Don Martin.

Don Martin was a very popular American cartoon artist known best with his most remarkable cartoons in MAD Magazine from 1956 to 1988. His art work lead to edge of expression in a good way. It was called many things in those earlier days, from bizarre to outrageously funny. His work may have lead to our now berserk style of humour with South Park, Family Guy and The Simpsons. Don Martin's cartoons would lead your imagination into the most awkward positions, with his cartoons leaving a very distinct message that will make you laugh and think about for years later.

Don Martin was born on May 18 1931, a time of conservative thinking. Mad Magazine knew exactly what they were doing when they hired Don Martin as one of their cartoonist - Mad Magazine wanted out of the ordinary and on the edge of controversy. The founder of Mad Magazine was Harvey Kurtzman, a well known cartoon artist himself. Can you imagine a typical day at the office of Mad Magazine? Pumping out zany outrageous tears of laughter cartoons on a daily basis – Talk about Fun – how could you call that work? 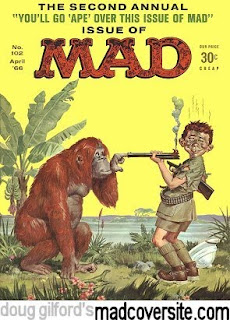 Don Martin was in the frontline of cartoons, such as The MAD Adventures of Captain Klutz in 1967. His favorite copyright sounds came out like : ''GLUP! GLIK! SPLORP! SLOOPLE! CHOMPLE! GARK! SKLORSH! GLUK! KLOONG! KAPLAM! SPMAM! POONG! BOONG! KLOON! I just love the sound effect - croaking frog or "FAGROON klubble klubble".

If you don’t know Don Martin, you have missed out on the most comical comics distributed with Mad Magazine. Mad Magazine changed hands a few times throughout its career, but it has lasted since 1952 and still going strong in 2010. The Politics may have changed but so has Mad Magazine – along with the Politics.

I’m sure Mad Magazine is missing Don Martin because his cartoon’s “touching the hearts” of his followers. My first Mad Magazine was in 1967 – I saved enough money from my paper route in Vernon, British Columbia to buy that year’s full edition. I remember taking the magazines and folding it to receive a “hidden cartoon message” within the fold. 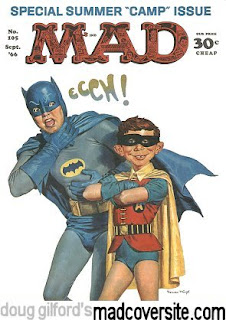 As an avid cartoon follower I would cut out Don Martins Cartoons and paste them up on my wall, which helps me during exams. A laugh or two or three made exam studies go quick. I’m really not sure how much Mad Magazine realized how their magazine touched so many kids. Each magazine I picked up I would be scrambled to see Don Martin’s comics...laughing and thinking how great it would be to be a cartoon artist.

Boy – I wish I was smart enough to keep them...can you imagine the collection price on those magazines today? But, then again, you had to keep them in the plastic cover to be worth anything. It was well worth the time dissecting the Mad Magazine.

To me Don Martin made Mad Magazine - the bizarre and outrageous. 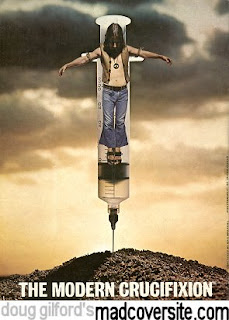 If you were to give out Gold Medals to Artists, I would think Don Martin would have collected a world record of Gold Medals for his zany superhero characters like Fester Bestertester and Captain Klutz that was adored by all of America, Canada, and then, came the World.

Unfortunately Don Martin passed away in January 6 2000, but his cartoon art works will agelessly be passed on from generation to generation.

If anything, Don Martins cartoon style will come back with a vengeance as new comic followers and artists catch eye of his humorous timeless cartoons.

Here is to you Don Martin, Congratulations to the best in cartoons. 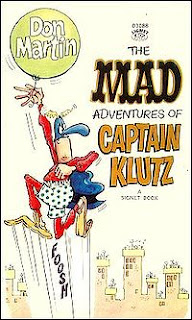 http://jrobbmontana.com/
Posted by bari at 2:18 PM